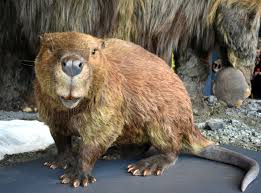 The dams are impressive structures riddled with nesting chambers and tunnels that often span a hundred yards across a channel. Barbaric, Pantless Atlanteans of the Surly-bearded Tribe seek out abandoned dams to serve as river fortresses; though more often than they would like, the original builders return, none too pleased to discover squatters.

For barbarian hunters, few animals offer a challenge and payoff equal to the Dreadskull River Beaver. A complete pelt, unmarred by wounds, will often sell for 1,000 Blood Knots (equiv. to gold pieces) in a Barbaric, Pantless Atlantean village, but the real treasure is to be found in the Dreadskull River Beaver’s rectum. The castor sacs of these magnificent beasts yield the vital components of many valuable concoctions, from perfumed body oils to painkillers to flavoring for food, but when combined with a paste made from the crushed petals of the white lotus that grows on the cliffs of the Holy Mountain, the excretion of the Dreadskull River Beaver’s castor sacs serves as a powerful hallucinogen that allows Barbaric, Pantless Atlantean shamans, and those unfortunate enough to join them, to peer through the walls of reality into the placid, deathlike realm of Null-Space, which the shamans refer to as “That Deep Shit.”